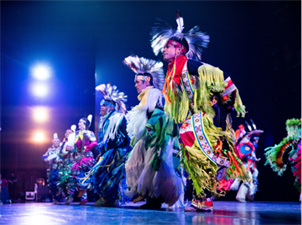 Brigham Young University:  Living Legends --   In a performance of culturally inspired dance, music, and costumes, Brigham Young University’s Living Legends celebrates the Latin American, Native American, and Polynesian cultures in their show, Storytellers.
There is nothing new in the legend that we are about to tell. It has been told in every age, in every land, in every tongue. It is the story of today and tomorrow—of how we connect with the Earth, each other, and those who have gone before. This is the story of the Living Legends.
Spectacular choreography, colorful costumes, and heart-pounding music bring to life the skill, beauty, and authenticity of these traditional cultures. All Living Legends members are of Native American, Latin American, or Polynesian heritage. Storytellers reflects the cycle of civilizations and weaves together the legends of the past with the reality of today. From the exciting Polynesian haka and poi and the graceful Mexican Fiesta dances to the expertise behind the Native American Hoop Dance, this is an experience you won’t want to miss.

Living Legends tours around the globe to places such as Australia, Canada, Europe, the Pacific Islands, and South America. In 2021, the group toured the eastern United States where they performed in Oregon, Idaho, Nevada, and California. In 2022, the group will tour Mexico, where they will perform in Guadalajara, Querétaro, Mexico City, Puebla, Oaxaxa, Mérida, Cancún, and Tulum.

During the summer of 2013, Living Legends traveled to Central America and performed for enthusiastic crowds in Guatemala, Honduras, and Nicaragua. One of the highlights was a performance in Nicaragua, where the president of the National Assembly, Santos René Núñez Téllez, and his council were present in the audience. Mr. Téllez expressed he was profoundly moved and impressed with the show. He remarked that “a culture does not die when it dies, it dies when it is forgotten. Your show rescues culture and heritage.”
In addition to performances while on tour, Living legends participates in community services and school assemblies, where they encourage students to pursue higher education.

One of the main goals of Living Legends is to encourage all people to take pride in their individual heritage and continuously better themselves. This focus is demonstrated in performances worldwide. The Office of Culture in Guatemala said, “Your performance was wonderful. Your presence here teaches our people something—to have high ideals and to talk proudly as a people. We hope this community will not be the same after tonight.”