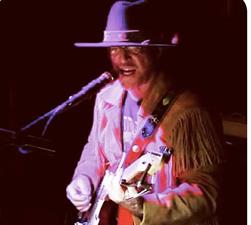 The featured entertainment has opened shows for Clint Black, Jason Mraz, and Lukas Nelson (Willie’s son) and Promise of the Real (Neil Young’s backing band and also featured in “A Star is Born “with Lady Gaga and Bradley Cooper) among other shows.

Sage Gentlewing is a Las Cruces based Singer/ Songwriter/ Guitarist who hails originally from The San Francisco Bay Area.
Raised in the 60’s heyday of Psychedelic music , ( the earliest days of the Grateful Dead and the “ San Francisco Sound” he cut his teeth as a 15 year old drummer in one of the very 1st of many bands opening for such iconic artists as Big Brother and the Holding Co featuring a yet unknown Janice Joplin, Buffalo Springfield , Moby Grape and other future stars.

Switching to guitar in 1967, his next band featured Michael Silversher who went on to have over 100 of his songs published with Walt Disney and still writes all the music for the Disney Muppets!
Sage has toured the world both in bands and under his own name as a solo act ongoing since 1980 including a 5 month tour of New Zealand, and USO styled military entertainment ( PACAF) tour of Japan ,S. Korea, and the Phillippines with a 7 piece band.

He’s self released 13 original music albums since 1985, and will be recording a new album near Austin Tx with Merel Bregante ( Loggins and Messina, Nitty Gritty Dirt Band, the Sarah Pierce Band) producing and playing drums.

He currently has a double CD ( Portrait of the Artist as a Complete Unknown” vol. 2&3 of original music available at the gig/

More info on Sage can be found on his website at: sagegentlewing.com

Friday night 6/3/2022 come on down to Roadrunner Emporium, 928 New York Avenue, Alamogordo and enjoy this rare opportunity for Alamogordo to meet and be entertained by this awesome Southern New Mexico talent with nationwide recognition. This is a free in store concert event to be enjoyed at the crossroads of music, art, culture and commerce - Roadrunner Emporium #AlamogordoMainStreet - New York Avenue.